This multi-parcel feature is not modularized! It is included with the regular Auction Flex software. To view pricing please click here. 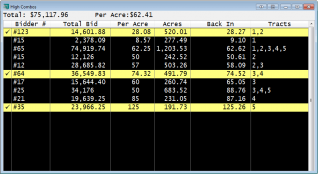 To the right is an example of our grid presenter. As you can see this screen makes it very easy for your bidders and staff to stay informed. The yellow highlighted rows and corresponding check marks indicate that the bid is in the leading position. There is also a "back in" column that shows any other bidder what they need to bid on a particular combination to be back in a leading position. Every aspect of this screen is customizable to your taste. Choose your own colors, fonts, etc.

To the right is an example of our map leader board. As you can see this feature starts with an aerial shot and then overlays the parcels with color coded shading to indicate who is currently the leader on a particular parcel or combination of parcels.

If a bidder's high bid is a combo, then the entire relevant combo region will be shaded the same color and shading pattern. In the example to the right, bidder #28 is the leader on a combo bid for parcels 1&2, and as such, both parcel 1 and parcel 2 are shaded red. Also notice that bidder #98 is in the leading position for the combo bid of parcels 4 & 5.

Every aspect of the map leaderboard screen is customizable to your taste. Choose your own colors, fonts, shading patterns, etc.