Auction Flex in the Cloud 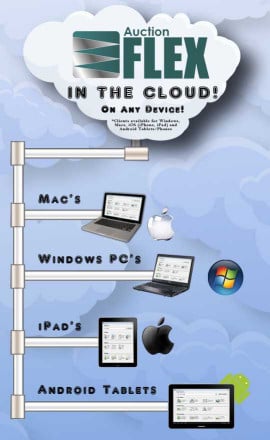 If you have multiple locations, but want to have a common Auction Flex between them, the Cloud is a simple solution. Everyone works with the same data (customer list, inventory, etc) no matter their location. This allows you to seamlessly leverage your historical data from all your locations to build targeted mailing lists for upcoming auctions.

Notes on smart phones: In a pinch you can pull up Auction Flex in the Cloud on your smart phone and lookup some information, however, a smart phone should not be considered a useful device because Auction Flex is designed for a larger screen.